ADMINISTRIVIA: It seems that every few years something catastrophic happens to my list server. Last time I lost my complete subscriber list and a good chunk of my archives. This time it was simply that the user interface on the Web crashed and it took them a day to fix it, so my apologies, but you'll never see Wednesday's post unless you visit this blog.

This year, Zondervan's "New International Version" of the Holy Bible will celebrate its 30th anniversary. To celebrate, two couples are driving a 42-foot recreational vehicle across the country and inviting some 36,000 Americans to hand write one verse of the Bible, "just the way it was originally copied." 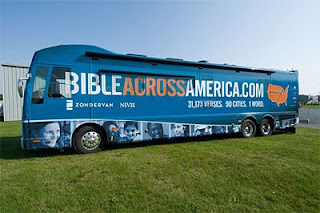 Read more about it here and here.

IF COLLEGE STUDENTS WROTE THE BIBLE

The Last Supper would have been eaten the next morning ... cold.

The Ten Commandments would actually have only been five, double-spaced and written with a large font.

Instead of fishes and loaves, it would have been Ramen® Noodles.

You could find the year old Bibles on Half.com or e-Bay.

Forbidden fruit would still have been eaten, but only because it wasn't cafeteria food.

Paul's letter to the Romans would be Paul's email to thepeople @ romans.gov.

Instead of creating the world in six days and then resting on the seventh, God would have put it off until the last minute and then pulled an all-nighter.

[lots of places, but this source was Syman Says, with some additional material by Mark Raymond]

WISDOM for YOUR WEEK: "For everything that was written in the past was written to teach us, so that through endurance and the encouragement of the Scriptures we might have hope." (Romans 15:4)

Mark's Musings is available each weekday via email, when it works. You can still get your own subscription. Click here ... it's free!