My Journey to Thin, Chapter 1

Well, as I promised a few weeks ago, I kept a meticulous food journal for the past three-plus weeks.

That very act helped me lose three pounds. I weighed in this past Friday at 251 pounds. Three weeks, three pounds. Hey, it's a start.

I have only one goal until the end of the year: try to maintain that tiny bit of weight loss through the holiday rich foods-great snacking-you'd be a fool to starve yourself period.

Reviewing my food journal, I see there was a little too much emphasis on late night eating, especially ice cream ... so I'm also going to try and cut down on that.

Come the first of the year, I'll give exercise another serious effort. We bought a treadmill and everything recently.

Your encouraging words are appreciated.
Posted by Mark at 4:02 AM 1 comment:

Email ThisBlogThis!Share to TwitterShare to FacebookShare to Pinterest
Labels: all about me, bonus, nutrition

At the end of every week, in the fine print of Friday's post, you'll find my personal mission statement in life: John 3.30. This verse says, essentially (depending on what translation you read), "He must become more; I must become less." My goal in life is to grow more and more into the image of Jesus. Indeed, that is what the very word "Christian" means.

Carol Mead, a remarkable writer with a wonderful gift of finding the holy in the ordinary (please visit her website), said it quite well in a recent post titled, "Mirror Christianity."

Commercials for a high-definition television say that the TV's clear picture results from thousands of tiny mirrors inside the set. Those mirrors produce, as closely as technologically possible, the "exact mirror image of the source material." To explain the high-quality picture, the ads say, "It's the mirrors."

We long for a clear picture of how God looks and acts, and each person has the potential to be one of those tiny mirrors reflecting God's image. If each of us lived only for God, then together we would produce a nearly exact image of the Source. Sadly, most of us can barely reflect God's image accurately for one moment, much less a lifetime, so the image of God appearing through us remains distorted and broken.

Occasionally, though, when we get it right, a glimpse of God appears. When we show selfless love for another person, we reflect the perfect love of God ... so it's not that God chooses to remain completely hidden, as we have the potential to reflect him. The problem is not God.

Speaking of reflecting Christ more perfectly, the title of Carol's piece reminded me of another lesson I recently read regarding a passage in C.S. Lewis' seminal work, "Mere Christianity." It dealt with our prayer life. Lewis says that whenever we pray to "Our Father in Heaven," or "God, the Father" we are, quite literally, claiming to be his son or daughter.

And that means that when we pray, we are "dressing up as Christ." That concept blows me away and makes a sham of all my selfish prayers to just get me through the day, help me lose weight, and bless my latest endeavors. It spins an entirely different perspective on my prayer life.

Time for another snapshot of my little corner of the world.

What I'm reading: I'm in progress on two books at the moment. One is an escapist little children's story by Cornelia Funke: The Thief Lord. My daughter ordered it through Scholastic and hasn't yet bothered to read it and I was desperate for some fiction one night, so I picked it up. The other book is Flyboys by James Bradley. He's the man who wrote Flags of Our Fathers, which some of you may have seen at the cinema, courtesy of Mr. Eastwood. It chronicles World War II in the Pacific arena through the perspective of the fighter pilots and crew. At times it can be quite, umm, graphic in its detailing of the horrors of war.

What I'm hearing: The Lead Instructor for my Computer Lab Cadre just congratulated all of us by giving us copies of The Trans-Siberian Orchestra's latest CD. It's awesome.

What I'm watching: Being a guy who appreciates good science fiction, I was on the "Heroes" bandwagon from the start. I also thoroughly enjoy "Studio 60"; I think it's the best written show on television and Aaron Sorkin is one writer who doesn't insult our intelligence. Still a big fan of "NCIS" on Tuesdays and we still catch "Numb3rs" Friday nights. We've sort of fallen off the "Lost" bandwagon. And oh, we also enjoy "The Closer" on TNT. Happy it's back.

What I've paid money to see: Don't tell my wife, but my daughter Amanda and I snuck off to see Happy Feet while she was in Florida. It's full of rhythm throughout and is a nice story with a nifty little ecological twist near the end. Go once for the story and twice for the soundtrack.

My latest wonder: I saw an article about "Generation Y" and it set me to thinking. All this "generational" talk began with the Baby Boomers, then it was the "Gen-X" crowd, now it's the "Generation Y" group of kids just starting/finishing college. What's next? Generation Z? And what happens after that? Is it the end of the human race? Or will the alphabet start over again? Maybe - since we've been through it once already - we'll start at Generation AA? And what will the battery people have to say about that?

My latest "Little Joy": Backing into a parking spot. Folks, it is sooooo much easier when you leave. Safer, too.

What I'm trying to get done: I'm in the middle of editing/writing some documents for my daughter's choir, I need to update my fantasy baseball league's Constitution, my band is in "negotiations" (for lack of a better word) with my church to be officially adopted as a ministry, there's a few more Christmas gifts to buy, lots more cleaning to do on the house, and my office is just about hopeless. I think the paperwork is winning.


That's about all from this end of the swamp.
Posted by Mark at 2:25 AM No comments:

Email ThisBlogThis!Share to TwitterShare to FacebookShare to Pinterest
Labels: all about me, bonus

A Light in the Dark 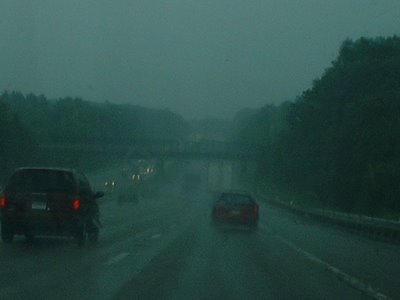 So I'm driving home from a computer lab class today ... it's about an hour's drive, in good weather.

Today the weather was not good.

Not only was the evening gloaming coming on, but the clouds gathered and the sky grew extraordinarily dark, and then it began to pelt down big, wet, splattery drops of rain.

But here's the cool thing. All the way home I was listening to a CD by The Trans-Siberian Orchestra, and right when things get their darkest and gloomiest outside, on comes a song featuring a children's choir and a melody that just takes wing and soars inside my vehicle and echoes all the way down into the depths of my heart.

The lyrics spoke of Christ coming at Christmas, bringing light and hope to the world. That song, at that moment, saved me. Just as things got their darkest, I was reminded that there is a Light no storm or gloom or black of night can quench.

"The people walking in darkness have seen a great light; on those living in the land of the shadow of death a light has dawned."
-- Isaiah 9:2
Posted by Mark at 2:35 AM No comments:

So my car was broken into this past Saturday and the thief took our digital camera, which I thought I had hidden underneath the seat ... apparently not well enough. The photo, by the way, is just one I found on the web, not our car. Couldn't get a picture of that because I NO LONGER HAVE A CAMERA.

But I'm not bitter.

Wait, yes I am. Mostly at myself, actually. I knew I should have put the bloody thing in the trunk but just didn't want to take the time.

I've been broken into before, many years ago, when I lived in a fairly shabby tenement with disreputable neighbors living upstairs and not much security on either door. My apartment was broken into several times, actually. Usually they just took food and whatever cash I'd left lying around. After those robberies, I felt, well, violated. Angry, vulnerable, and violated. I moved as soon as I could.

But this time I just feel stupid.

Stupid and broke. It's nearly $200 to fix the broken window and another several hundred to replace the camera. What's that? Insurance? Well, if we had more coverage than just the classic PL/PD on our vehicles, perhaps that would apply. As it is, we're just out a ton of money ... at least half a ton, anyway.

Man, these lessons are too expensive to be learning at my age.
Posted by Mark at 12:30 PM No comments: