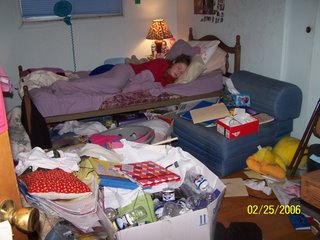 ...since last I posted here? Gracious! I'll try not to let *that* happen again.

On February 23 in "Mark Mail," I wrote about the "Owner's Manual for Your Teenage Daughter." In it was the sentence, she will "sleep in a burrow of dirty laundry." I offer the picture above as Exhibit A.

That room looks *much* cleaner now. We picked up some second-hand furniture, a new canopy bed, and an area rug at a friend's estate sale and had to shovel everything out and clean to make room for it.

So what's new at your end of the swamp?
Posted by Mark at 7:50 PM No comments:

Email ThisBlogThis!Share to TwitterShare to FacebookShare to Pinterest
Labels: bonus, family, your thoughts

Another sign the Apocalypse may be upon us: in an upcoming episode of "Will and Grace," Britney Spears plays a conservative Christian talk show host.

The sound you're hearing is conservative Christians everywhere retching.

As I mentioned in Mark Mail, the missus starts the latter half of her 4th decade on the planet this weekend. Congrats, best wishes, and - of course - cold cash can be sent to bonraymond@comcast.net. We're celebrating at her favorite Chinese restaurant with friends.

I've been thinking a lot about the Lord's Prayer recently. Everything you need for a full, vibrant prayer life is in there. Hmm. More on that in a separate post.

So tell me how you met your better half. You have to register to leave a comment, but it's free and a one-time deal. I appreciate the efforts you make on my behalf.

I first met Bonnie at a local Wendy's fast food restaurant I was managing. (Long story.) She had long, long red hair and a blue windbreaker on with a little button that said - in a mimicked Coca-Cola script - "Things Go Better With Christ." She also had a smile that you could plug into an outlet and light up a stadium.

I was smitten. Turning on all my playboy charm, I smoothly said, "I like your button." Then I fetched her drinks and her burger. We didn't see each other again until we both attended the same small Christian fellowship group at a ministry I was working with. One of our friends was getting married soon, so I asked her to go the wedding with me. She agreed and the rest, as they say, is history.

Email ThisBlogThis!Share to TwitterShare to FacebookShare to Pinterest
Labels: bonus, relationships, your thoughts

o Mary Jo is well and truly married and on her way to a new home in California. It was, as most weddings are, a thing of beauty and a joy to behold and even more fun to be a part of. My band provided all the music for the wedding, which had a decidedly Beatles theme. We played "When I'm 64" for the bridal party processional, the traditional Wedding March for the bride, "Love" by John Lennon for the Unity Candle, and then we finished up with "All You Need is Love" and "With A Little Help from My Friends" for the recessional. We'll probably keep most of those songs in our repertoire.

Oh, and we also played "Butterfly Kisses" during the wedding rehearsal as a surprise for the bride. Her dad sang it. Well, sang and sobbed and choked his way through it, anyway. It was a tender and touching moment.

o I've put in for a new shift at the Post Office. Right now I'm working 10:30 a.m. to 7:30 p.m (with the commute, it winds up being more like 10-8). Yuck. It's too early to get much done in the morning and too late to get anything done at night. I'm sure I've whined about this before to many of you. I've applied for a position at a sub-station closer to my home with hours of 5:30 a.m. to 2:30 p.m. We'll see if 20+ years of seniority will be enough to land it. It's quite a shift in my bioparadigm, after working the later hours for nearly a year-and-a-half, but one that I look forward to making. I should know by the end of the week.

o My daughter got her hair cut! My daughter got her hair cut! This is significant, folks. She had been wearing it nearly down to her backside and was adamant about not getting it cut ... but she was, unfortunately, equally adamant about not brushing it out regularly and it snarls pretty easily and fairly badly. Many's the night I heard her down in the living room screaming "Ow" and "Not so hard!" at her mother as they worked at fixing it. I don't know if she just got tired of that battle or what, but Monday night she and Mom went out to the mall and when she came home, her hair was shoulder length. Yay! It looks good, too!

So what's new in your world?

So what are you doing for Lent?

Some people give up things, like coffee or chocolate, for Lent. One year our family gave up ice cream - we were hooked on Dove Bars - and used the money we would have spent on them in our church fundraiser against world hunger.

I usually look at Lent as a personal time in the spiritual wilderness ... 40 days to prepare my soul and spirit for the renewing celebration of Easter. Not so much a time to give things up as to rededicate myself to doing something for the Kingdom.