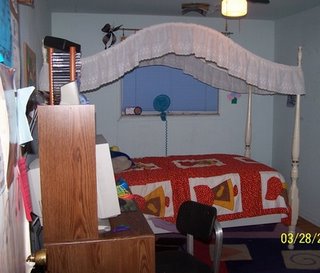 In a post I titled "Has It Really Been 11 Days..." (see link at left), I published a photo of my daughter's bedroom.

Well, in the interest of fairness, here is her room once we cleaned it up and installed the new/used furniture we purchased from an estate sale.

Quite the difference, eh?

Remarkably, more than a month later, it still pretty much looks like that.
Posted by Mark at 10:43 PM No comments:

I am at the bitter end of Saturday, Day Six of TV Turn Off Week, and the family has successfully not clicked on either one of our sets since we went to bed last Sunday.

It helps that I hid all the remote controls.

But still, I think even if I hadn't, we would have had the strength of character to keep the screens dark. Though we have been tempted, and have kind of "cheated" just a little tiny bit. Amanda goes to a latchkey program here in our neighborhood after school three days a week, and we allow her to watch what little bit of television is on there. If there was a set turned on at the mall, or coffee shop, we peeked. We definitely peeked. Once we sat at our kitchen table and noticed we could see through our neighbor's window and view their set ... but the distance was too great and the picture was too small to be meaningful. I confess it here only in the interest of full disclosure.

My wife did ask her boss to TiVo one of our six "must watch" shows. The other five we gave up this week ... but even that was not such a sacrifice since two of them weren't on and two others were reruns (I think; I gave up reading the TV listings this week). Finally, we agreed that playing a video game using the TV screen wouldn't be considered watching television ... but no one even did that.

We've spent more time playing games on the computer, we've read a whole lot more, and my daughter has spent some time this week composing her first musical piece on the piano. And oh, we napped a little bit more. That's always good.

Did anybody else out there take part in this social experiment? What was it like for you?
Posted by Mark at 11:30 PM 1 comment:

How to Fight the Culture War

I read this today in a piece entitled "Furrowed Brows" on the Christianity Today site (I've abridged it just a little bit).

"Not long ago I attended a strategy session on the culture war. Participants examined the decline of marriage, the cheapening and flattening of human sexuality into contextless pleasure, the exploitation and destruction of unborn human beings. Speeches were given. Brows were furrowed. Resolutions were made. All were earnestly committed to the cause, and most, to be blunt, were not having a very good time ... it is hard to believe someone who speaks of love through clenched teeth.

"Jesus was hardly shy about confronting the patterns of sin in his culture - though he was consistently harder on the pious than he was on the pagans."

Now this is the part that leapt off the page and grabbed me by the heart:

"But everywhere Jesus went, life blossomed. The sick were healed, lepers were touched, daughters and sons were plucked from the mouth of the grave. Jesus left behind him a trail of tears and laughter, reunited families, and terrific wine, as well as dumbfounded synagogue leaders, uneasy monarchs, and sleepless procurators. His witness against violence, amidst a culture in rebellion against the good, was neither withdrawal nor war. It was simply life: abundant, just, generous life. And, ultimately, a willingness to let the enemies of life do their worst, confident that even death could not extinguish the abundant life of God."

Make it your mission to plant goodness, and watch life blossom. 'Nuff said.

What's diversity mean to you?

So I interviewed for a new job within the Postal Service yesterday afternoon. Got my hair cut and everything, trying to make the best impression possible. It's for the position of "Lead Computer Lab Instructor," which is basically right up my alley. Time will tell if I'm the one the board recommends to the selecting official.

I only drew a blank on one question: "How would you accommodate diversity in your classroom?"

Now we come to the title of today's post. What's diversity mean to you? When you hear the word, what do you think?

Maybe it's my age, but when that word was first put into use it was as a politically correct way of saying "affirmative action." It meant women and minorities. So my brain is thinking, "how would I accommodate women and minorities in my classroom? The same as anyone else. Duh!"

What came out of my mouth was some mumbled jumbo about making sure my instructing staff was diverse and all postal employees of diverse backgrounds would see themselves represented in the leadership of the lab...blahblahblah, woofwoofwoof, etc.

But then I confessed to the board, "I really have no idea how to answer this question. It doesn't seem to be an issue for me. People are people."

It was then that I learned that in our Postal Service World, diversity means "anyone who is different than you are" and the question was really about people with hearing impairments, the physically impaired, or people with medical conditions that require them to leave the room frequently ... which is very nearly a totally different question than the one I thought I had been asked.

A friend later that night clarified things for me. She said, "What they should have asked you is how would you accommodate special needs in your classroom?"

Now THAT question I could have answered.
Posted by Mark at 10:07 AM No comments:

So, how are those New Year's Resolutions coming along? I've completely failed at one, haven't really had a chance to test myself on the second, and I'm doing so-so on the third.

Okay, so how are those Lenten resolutions coming along? Only three more days to go!

But tell ya what, let's agree that we won't beat ourselves up for not hitting the mark on these resolutions, okay? Let's just do our best. If we fall, shake it off, get up and make another attempt tomorrow.

That's the recipe for sanity.
Posted by Mark at 8:15 AM No comments:

There are only two Sundays a year I don't mind missing church: one is during my anniversary getaway weekend with the missus. The other is for my annual fantasy baseball draft. I know, I know, that undoubtedly marks me as all kind of heathen, but baseball is an unapologetic passion for me and it is often as spiritually rewarding as a church service.

I confess I love to gather in a small room once a year with at least eleven other grown adults who love to pretend we're smarter than anyone else in the place. It's a strange game, fantasy baseball, invented by several New York sportswriters and raconteurs in the mid-80's. The basic premise is this (and I'm really, really simplifying things for you): through any of several means, you "draft" real major league baseball players for your team, which closely mimics the actual roster of the major leagues. Only you're not bound by team loyalties. You can choose any player from any team.

Then you watch the games. The statistics compiled by the real life players are the statistics your team compiles. Whichever team comes up with the best aggregate of statistics at the end of the regular baseball season wins the league. The winner usually gets a small gratuity, a trophy of some sort, and - most importantly - bragging rights throughout the next long six months of winter.

This is not considered gambling - and has been ruled on by the courts - due to the fact that nothing rests on the outcome of a single event or game. In fact, Major League Baseball (at www.mlb.com) sponsors several versions of fantasy baseball each season.

I founded a league at my Post Office in 1989. I was the Commissioner and Statistician for many years. I still play in that league.

I have never won it.

I've won other leagues and "finished in the money" on many other occasions, but I've never taken home the trophy in the league I started. I can't figure out if this is poetic justice or just a cruel twist of fate. It certainly keeps me humble ... usually because the other owners in my league never, ever, EVER let me forget it.

(Insert pause while I mumble and grumble incoherently to myself about that for a bit.)

Anyway, I currently limit myself to playing in two leagues and had my first draft today. As usual, I thought I did an outstanding job, though I did miss my partner (I have a co-owner in that league to bear some of the burden; he had prior commitments). I won't bore you with any more details ... but watch this space in about six months to see how everything comes out.
Posted by Mark at 11:02 PM No comments: