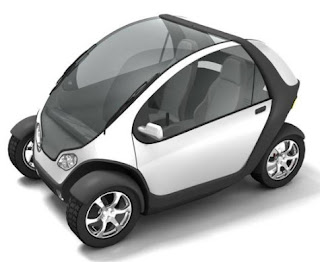 Nybble Newsletter reports that researchers at MIT in Boston are developing a concept called the "City Car," an electric-powered vehicle where the motor, brakes, and suspension are all housed in the wheels. It's a design that makes the car "foldable" and you can fit eight of them into a parking space designed for one vehicle.

Users would "rent" the vehicle much like you rent trolleys or luggage carts at the airport. Drive it to your destination and "stack it" back into another rental spot where the batteries would be recharged. Solar panels set up near the stacking stations would provide power to recharge the batteries and dump any excess energy into the city's power grid.

The concept vehicle would seat two, and may be capable of speeds up to 100 mph, though why you would need to travel that fast in the city is beyond me. But hey, check it out.

ELECTRIC CAR JOKES
With apologies to the Yugo

How do you make an electric car go faster?
A tow truck.

What do you call the shock absorbers on an electric car?
Passengers.

Two guys in an electric car were arrested last week for a push-by shooting.

The electric car has an airbag, but you have to plug it in.

A friend took his electric car to a dealership the other day and said he wanted new windshield wipers for it. The guy said, "Okay, sounds like a fair trade."

What do you call an electric car at the top of a hill?
A miracle.

What do you call an electric car with twin tailpipes?
A wheelbarrow.

Seriously, though, with the price of gasoline, I think the concept of an electric car is awesome. We certainly need to start using technology that's renewable. Hey, have a great first weekend of the year and I'll see you on Monday.

WEB SITE of the WEEK: I don't know much about "Fimoculous" and give the page a minute to load but if you want to review 2007's Best of, Top Ten, Most Notable 100, Fifty Best of, well, pretty much ANYTHING, go to http://www.fimoculous.com/year-review-2007.cfm.

Subscribe to Mark's Musings, view past issues in the Archives, or help me defray publishing costs at my web site. To keep celery crispier longer, wrap it in aluminum foil before stashing it in the fridge. You can forward or reprint "Mark's Musings" freely but please keep the credits attached. The credits have been right here, doing their job since 1998. Don't blow their record now. Original material and commentary © 2008 by Mark Raymond. My personal mission statement is John 3:30. "He must become greater; I must become lesser."

WORDS for YOUR WEEKEND: "There's folks who would stand on their heads and then say the fault was in their boots." (George Eliot)

jackmarie said...
This comment has been removed by a blog administrator.
12:38 AM