Travels with Dad: The Trip Over 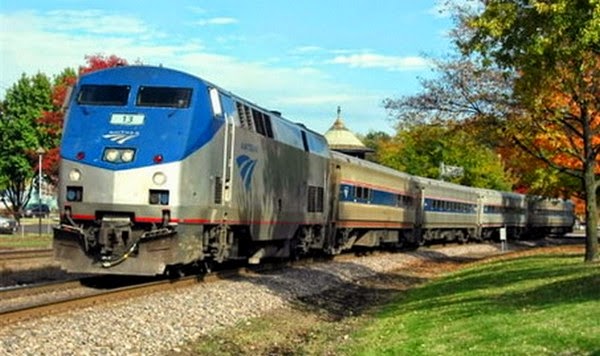 We left East Lansing via Amtrak at 8:45 Friday morning. It's the only way I will go to Chicago, anymore. Round trip was around $135 for Business Class, which is the only way to go if you travel with Amtrak. It's a pleasant enough 5-hour trip, and completely stress free. Comes with a free beverage from the dining car, as well. Both Dad and I knew it was going to be a long plane flight over to Ireland, so we wanted the early leg to be as easy and simple as possible. So far, so good.

Our original plan was to take a taxi from Union Station in Chicago out to O'Hare Airport. That looked like it was going to cost about $60, maybe more, and Dad's Scottish Ancestors began kicking him in the back of the wallet. So he did some looking before we left and stumbled across the idea of taking the El (elevated train) from downtown Chicago out to O'Hare. He raised it with me on the train and running with his idea, I did some online research with my phone (thanks, Amtrak, for adding WiFi), and discovered that there was a Blue Line station just three blocks from our location and the best part was the cost: Just $3.00 per person! Unknown to us at the time, this would start a series of "Good News, Bad News" situations for the rest of our journey to the Emerald Isle. It took a little longer (half an hour via taxi vs. nearly an hour via commuter train), but again - stress free!

GOOD NEWS: The train took us right to O'Hare.
BAD NEWS: Dropped us off nowhere near the International Terminal and Dad doesn't walk far.
GOOD NEWS: We found a wheelchair.
BAD NEWS: Eventually.

GOOD NEWS: We saved more than $50 by taking the commuter train instead of a cab.
BAD NEWS: We lost it all in converting our American dollars into Euros. (And then some.)

GOOD NEWS: We purchased a day pass for the Aer Lingus Lounge and it was a little slice of heaven. Quiet, comfortable, and everything was free (food, drink, snackage, newspapers).
BAD NEWS: There was still a 5-hour wait to endure before the plane would take off.

GOOD NEWS: The plane left on time!
BAD NEWS: The seats were so small and narrow, Dad's elbow was in my lap and I was anxious that my elbow would be in the lap of the person to my left.
GOOD NEWS: Turns out I didn't need to worry.
BAD NEWS: A toddler was sitting next to me.

GOOD NEWS: He was one of three small children traveling together with Mom and Dad, including his older sister and a baby. The airline moved the family so they could all sit together.
BAD NEWS: They were moved to the row RIGHT IN FRONT OF US.
GOOD NEWS: It wasn't great, but certainly not as bad as we feared, either.
BAD NEWS: The small seats and the length of travel had both our muscles tied in knots by the end of the flight.

GOOD NEWS: We arrived safely and half an hour ahead of schedule.
BAD NEWS: We slept for maybe two, three hours on the flight. Maybe. By the time we got there we had been up for nearly 24 hours, with only a short nap.
GOOD NEWS: The wheelchair was waiting for Dad at the plane.
BAD NEWS: Our luggage wasn't.
GOOD NEWS: After the carousel stopped and we were about the only people left standing around it, it started up again and our bags *finally* showed up.
BAD NEWS: We were told we could find a wheelchair rental facility at the airport. There wasn't one.

GOOD NEWS: The rental car place found us one.
BAD NEWS: The car reserved for us would barely hold the two of us and our luggage. No room for a wheelchair.
GOOD NEWS: They had a larger vehicle available.
BAD NEWS: For several hundred more Euro. Plus the wheelchair rental.

GOOD NEWS: Dad always expects financial issues and carries extra travel money.
BAD NEWS: We had to go way out of our way to find the wheelchair rental company.
GOOD NEWS: I adjusted much quicker than I feared to a right-hand drive vehicle operated on the left hand side of the road.
BAD NEWS: By now Dad and I have been up for about 30 hours and I'm bone tired and nearly asleep at the wheel.
GOOD NEWS: We found the wheelchair rental!
BAD NEWS: The wheelchair had two flat tires.
GOOD NEWS: They had another one available.
BAD NEWS: By this time I am even more tired and not able to concentrate really well on the road. I was honked at.
GOOD NEWS: Only once! (My goal while driving is to make it through the week without anyone calling me a "fecking idjit.")

After the wheelchair rental, we made our back into downtown Dublin and visited the Guinness Storehouse, which came as part of our tour package. 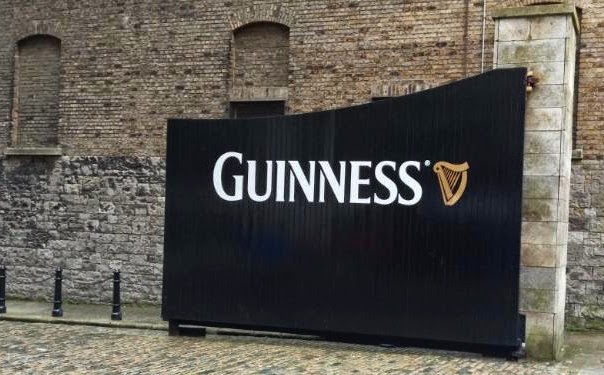 After a bit of trouble getting the help to recognize my father was in a wheelchair, we got in and started our self-guided tour. It was Saturday afternoon, local time, and the place was absolutely packed; nearly shoulder-to-shoulder.

Sadly, although we could have spent hours learning about the history of Arthur Guinness and his magnificently stout beer, by now Dad and are looking at not having eaten in about 16 hours and all we want is to find one of the five cafes and restaurants inside. For your edification, you can read a timeline PDF provided by Guinness here.

We did make it up to the Gravity Bar on the seventh floor, where the crush of people was even worse, and it was nearly impossible to maneuver a wheelchair around inside. The unique point to the Gravity Bar, as anyone who has been there can tell you, is that there is clear Plexiglas opening onto a nearly 360º view of Dublin. See the photo below. You may be able to click for a larger image.
I enjoyed a glass of Stout. It was thick, it was creamy, it was dark, and there was the bitter aftertaste that let you know you were drinking a *real* beer, by God. Dad even had a sip, and he's been a teetotaler for years. He explained to me, "Well, you can't come all this way and not at least have a taste!"

So we didn't take the full trip. Maybe next time I make it back to Ireland. Using the GPS we rented, we began making our way to our first hotel - the Heritage Resort Golf and Spa, a five-star hotel in County Laois. (Pronounced, I'm told, "Leash.") This place is nice. You look up "swanky" in the dictionary and there's a picture of it, as the saying goes.

A word about driving in Ireland. The GPS kept telling us to "take Slip Road" and exit to the left. Our tired, fuzzy brains eventually realized they meant to take the exit ramp off the freeway. Not sure where the etymology comes from, but I'm betting it has something to do with being able to "slip off" the freeway.

Also, Ireland is *lousy* at street name signage. If you're extremely lucky, you'll see a street name not up above the traffic, like we have in the States, but at eye level directly in front of your vehicle as you need to make your turn, praying you have chosen the right lane. Normally when we drive places, one of us will drive and the other nap. Not this trip. I am the only driver and Pop is desperately needed to read, follow, and listen to the GPS unit. We learned quickly not to look for street names, but for Pop to watch the GPS closely and when we get to the actual turn, tell me which street to take.

It's a Garmin unit, and it highlights the route in a bold, thick, pink line. I had to keep telling Dad, "don't tell me the street name, tell me when the pink turns!"

GOOD NEWS: We eventually got the hang of it.
BAD NEWS: I think.

Mark's Musings is published on a semi-periodical basis that may change without notice. Find me on Twitter at http://www.twitter.com/markmusings. Facebook link is over there to the right. This blog is considered to be a digital periodical publication and is filed as such with the U.S. Library of Congress; ISSN 2154-9761. At five hours ahead, we will have to get up at two or three o'clock in the morning to make the free breakfast that came with our tour package. So I'll be asleep by 8:00, y'all.
Posted by Mark at 6:36 PM