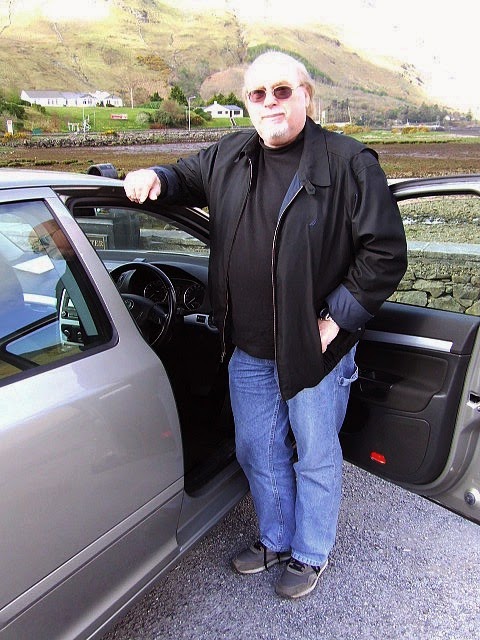 Today we drove up into Connemara, which is west and northwest of Galway. Here we encountered the infamous roads of which we were warned. Narrow, winding this way and that, uneven, bumpy, no shoulder and always on alert for wayward sheep. BUT ... they were all well-paved!

And the drive was certainly worth it. We drove the road cut through the Twelve Bens (Pins) mountains. I suppose some might call them really large hills - the highest being 730 meters (about half a mile) - but the Irish call them mountains and who are we to argue? They are certainly gorgeous. Our hotel concierge told us he thought this was the prettiest part of Ireland and he wasn't far wrong.

At first it reminded us of Michigan's Upper Peninsula but by the end of the drive, we were into a section that reminded us more of a dry western part of the U.S. Everything was brown, lots of scrub grass, rocks, and sheep. They call them the Twelve Bens because there are a dozen mountains, rising to points, good hikes if you're into that sort of thing. And they were the reason the road was so dang windy and uneven, as the engineers simply cut in between and around the hills.

I must admit this driving from the other side of the car on the other side of the road carries with it a certain element of ... fun. It's just such a huge change in perspective that it's challenging and I find myself rising to the challenge each day. There is, however, also a very real element of ... terror. Serious, bone-gnawing anxiety. Not since I was 16 years old and behind the wheel of a car for the first time have I kept my hands at "10 and 2" so often for so long. 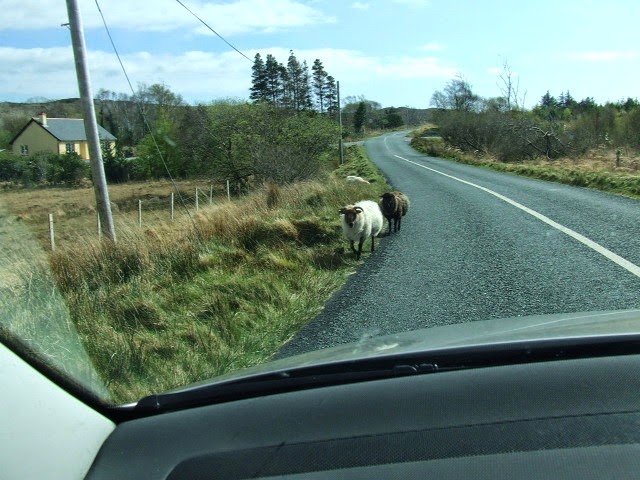 In Connemara, Dad and I found ourselves driving slow. As in, really, really slow. Not only was Pop wanting to snap photos often, but the nature of the roads kind of demanded you keep your foot on the brake as much as on the accelerator. And then those little fluffy roadside umm, "speed bumps" (see photo) would be lurking around the corner and force you to slow down.

Our route was sign-posted at 100 kilometers per hour. That's about 63 m.p.h. Yeah, sorry. No. No. Way. Only a fool, madman, or the Irish would drive that fast on these roads. Today was, in my mind, known as "you show me a straight stretch of road, I'll show you a bunch of angry Irish motorists passing me."

We were told that, for the most part, Abbeys fell into disuse as religious fervor waned and they were eventually purchased by a rich nobleman who turned the place into a castle. In this case, the reverse happened.

Mitchell Henry, an Englishman (whose family was from Cork so he always claimed Irish allegiances) would frequent Connemara and stay at Kylemore Lodge, a hunting cabin on Kylemore Lake. He fell in love with the area and when his father passed, he received a large inheritance and purchased 13,000 acres of land and built Kylemore Castle.

He developed the land and invested heavily in economic reforms in the area, eventually becoming an M.P. (Member of Parliament) for Galway. The castle was finished in 1871. At the same time, he built a Victorian Walled Garden, the largest of its kind (6 acres) in Ireland. Just three years later, his wife died of dysentery while they were vacationing in Egypt. Deeply in love, Henry had the same architect that designed the castle build an accompanying Gothic Chapel in honor of his wife. Eventually, Henry went broke from losing money on his local investments and maintaining the property and sold it to the Duke and Duchess of Manchester in 1903.

The Duchess was an American woman and her father, Eugene Zimmerman - a wealthy businessman - bought the place for them as her dowry. The Duke, however, was a gambler and in 1914 he lost the castle and grounds in a game of cards. A caretaker was installed and the property was eventually purchased in 1920 by the Catholic Church on behalf of an Irish arm of Benedictine Nuns, who have their own interesting back story. You can read more about that here by scrolling down just a little.

So that was how (and when) a castle become an Abbey. There are about 20 new photos up on my Facebook Page with more from the Glenlo Abbey, some views from Connemara, and Kylemore Abbey (with the Victorian Walled Garden). 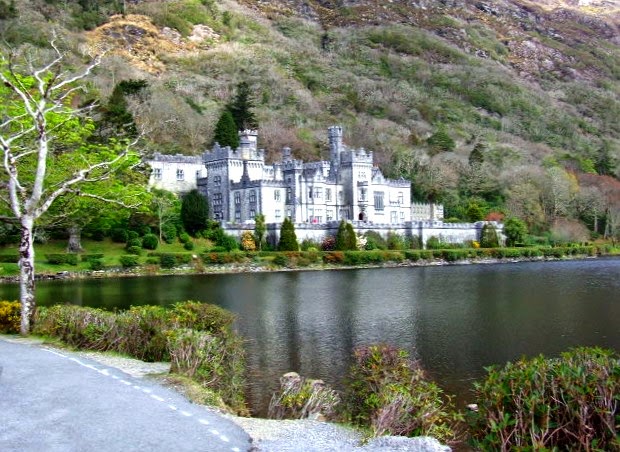 On the way back to our *other* Abbey, suddenly a trouble light chimed and began flashing at me from the dashboard. We pulled off the road and yanked out the owner's manual to discover it was a "glow plug" (spark plug) issue, and we were advised to proceed immediately to the nearest repair facility.

Fortunately, we had just gone through Oughterard (about 15 minutes from Galway) and went back to a petrol station. They let us use their phone to call the rental company and get authorization for a garage to take a look at it. We were directed to a place just one block away where a fella named Gary Higgins took a hard look at things. If you're ever in trouble with a vehicle and near Oughterard ("oot-a-rard"), stop at the Esso Station and ask for Gary.

He checked. And checked. And fiddled with some things inside the engine. Checked again. Then took it for a drive. Later, my Dad explained something to me that made more sense of what Gary told me. Our car, you see, a Skoda Octavia, used a diesel engine. Dad informed me that diesel engines are "workhorses" and need to be driven hard.

What Gary said to me, after all this checking and a test drive, was, "It's not the glow plug. I think it's a sticky EGR valve. It just needs revs, yah?"

Revs. Revolutions. The engine needed to turn over faster. In other words, on these narrow winding Irish roads, I needed to be driving *faster.*

+++++
Mark's Musings is published on a semi-periodical basis that may change without notice. Find me on Twitter at http://www.twitter.com/markmusings. Facebook link is over there to the right. This blog is considered to be a digital periodical publication and is filed as such with the U.S. Library of Congress; ISSN 2154-9761. Tomorrow: the Cliffs of Moher!
Posted by Mark at 6:38 PM