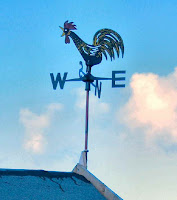 Golly. A third of the season is just about gone, and we're still waiting for Spring. It *snowed* yesterday! Michigan (shakes head in bafflement). Guess we'll call it Wintring. In a couple of months we'll be having sprummer.

Famous preacher C.H. Spurgeon told the story of a pastor who was out for a walk in the countryside when he stopped by a farmhouse for a drink of water. As he sipped from his glass, he struck up a conversation with the old farmer who lived there.

As they spoke, the pastor noticed that the farmer's barn had a weathervane on it that was spinning around in the wind, which was picking up. On the weathervane the words "God is Love" were engraved.

The pastor turned to the farmer and said, "I have to say I don't think that's a very good way to talk about God's love. Are you saying His love is wishy-washy and changes, depending on which way the wind blows?"

"Not at all," replied the farmer. "That weathervane is saying, 'No matter which way the wind blows, God is Love'."

WORDS for YOUR WEEK: "Isn't it funny that the same people who laugh at science fiction listen to weather forecasts and economists?" (Kelvin Throop III)

Can you please tell me the source for the story about CH Spurgeon on your post from 19.04.11?

I also have this story but need to cite it correctly for a m/s.
Man thanks
JS