Friday, Thy Name is Frustration

I once heard a comedian do a riff on snooze alarms. "We hate waking up in the morning ... now, thanks to snooze alarms, we're waking up three times every day!" Today made me feel that way. I had already suffered through driving in Dublin to get to our hotel. Today, the plan was to make our way south to Wexford, taking in a castle or abbey or two along the way. Bonnie hadn't yet seen a castle, and she felt that a trip to Ireland would not be complete without that.

But our trusty steed threw a shoe. The Ford Focus we had rented had, somewhere along the line, blown out the fuse to its power sockets, leaving our GPS running on battery and this morning, within two minutes of leaving the hotel, it went completely dead, leaving us driving blind in Dublin with NO IDEA of how to get back to the airport. While I was fighting Dublin traffic - and have I mentioned that there seems to be construction going on with detours (the Irish call them derivations) on nearly every street - we were trying everything but mouth-to-mouth to get the GPS unit back up and running.

Finally, in desperation, I turned on my phone. We had international calling and data installed on our plan before we left the States. Only you know what? AT&T couldn't find a signal. The phone was offline completely. I might as well have left it in Airplane Mode for all the good it did us.

So I was driving in one of the worst cities of the world to drive in - for the second time - and I was navigating literally by the seat of my pants. And that can't possibly be a good thing because my pants couldn't even see over the steering wheel.

So, once we hit the waterfront (or nearly there) we turned north. I knew the airport was north of Dublin so we started heading that way and before long, we were out of Dublin. It turned into a quite nice drive, mostly along the coast, but we still had no clue where we were or where to go. The map provided by the rental car agency (see photo) was, umm, really no help.

But before long we saw an airplane icon on the road signs, so we rejoiced and began following them ... only to have them lead us right back into Dublin!!! For the third time, just like a snooze alarm! By this time I could have chewed through nails and my blood pressure was approaching Dow Jones territory.

Lo and behold, what to our wandering eyes should appear, but another airplane icon! So we began following that and when we hit the M1, we knew we were finally on the right path. Having successfully and at long last reached the rental car agency - albeit three hours after we had started out this morning - we swapped out one trusty steed for an identical vehicle, making ABSOLUTELY SURE there was not going to be a further issue with the GPS. We were issued refunds, made promises, and once again we set out for Wexford ... but our day of sightseeing was shot.  It was after 2:00pm by the time we got to the hotel and I instantly crashed for a good long nap, having been up late the night before and a complete bundle of nerves by this time. 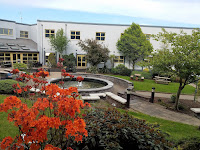 So today turned into a "rest" day, where we just stayed at our hotel and enjoyed the view from our hotel room (see photo). To be honest, with the change in time - Ireland is five hours ahead of the States and the travel over takes about 16 hours with very little sleep - we really kind of needed a slow day.

By the way, you can click any photo on my blog and see it in a bigger version, much easier to make out details and such.

Tomorrow is a big day as we head west to spend an hour or two in Waterford, then on to Cobh (pronounced Koahb) and finally to our next hotel in Cork.

Mark's Musings is published on an occasional basis but that may change without notice. This blog is considered to be a digital periodical publication and is filed as such with the U.S. Library of Congress; ISSN 2154-9761. Click the photos. You'll be glad you did.
Posted by Mark at 6:28 PM